We have been blessed with a terrific number of books from Shimmer authors this year, and it’s been hard to keep up. This fall, we’ve been catching up with our authors, and here’s another one, Fran Wilde, whose Riverland is an important read for many reasons. If you haven’t already dived into it, add it to your fall stack. You won’t be disappointed! 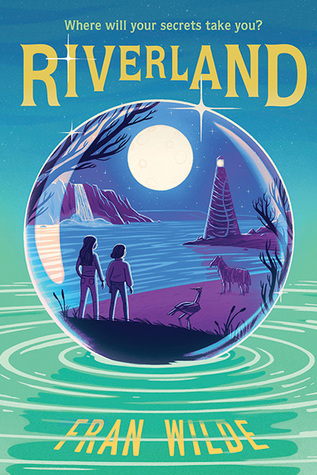 Riverland, your first middle grade novel, came out in April of this year, and here we are somehow deep into fall. It’s like we’ve fallen into a portal and are now Elsewhere. What inspired Riverland?

I feel that way a lot!

Riverland has a number of layered, intersecting inspirations. Family, sisters, ecology, the Chesapeake Bay, the amazingness of glass. At the heart of things, I wanted to tell a different kind of story than the one we are used to seeing about growing up in a violent house. I wanted to give the two girls — and it was important that they were girls, because we’re much more comfortable with seeing male characters in danger, but the reality is things happen to all kinds of people — the opportunity to have their own adventure, to rescue themselves, and to have agency in a world that wants to take it away from them.

Your work often layers the ordinary everyday with the fantastic. Where did your love of fantasy begin? Can it be pinpointed?

The Annotated Alice. I read it by accident before I read Alice in Wonderland — and I think footnotes are kind of my first fantasy world, where adults argued with each other in civil, numbered ways.  And The Phantom Tollbooth. And Winnie the Pooh. Also The Neverending Story, and the Muppets.

Your work also extolls the unseen and the overlooked (take for instance the Hugo-nominated “Clearly Lettered In a Mostly Steady Hand,” Uncanny Magazine). What aspects of Riverland have perhaps been overlooked since its release? What haven’t we seen?

I think the heart of the story, which is an exploration of different kinds of anger — especially as children feel it and as they are taught to express it (or to not express it) — is something I’d like to see. We aren’t comfortable, many of us, with feeling angry. We feel like it weakens us. And some kinds of anger does just that. But not all of it. At the same time, others use anger as a weapon. Maybe if, as children, we talked about all the different kinds of anger — and how to express it — those weapons would be blunted, and we’d feel stronger.

If you had a portal beneath your bed, as Mike and Eleanor do, what/where/when do you think it would open onto?

There would definitely be a beach or an ocean. Maybe a ship.

What portals have you discovered with your daughter?

Books — so many new books, that she discovered on her own, or with friends, and introduced me to. All books are portals.

Our great and fabulous genre is filled with portal fantasies, which are on some level, about survival. Are there certain portal stories, or survival stories, that have captured your attention and have never let it go?

The Phantom Tollbooth, for sure. But also, The Lion, The Witch, and The Wardrobe. And Howl’s Moving Castle.

Have you ever played the game Portal? We tried, but we fear badgers were not made for portal-hopping…

I have. There’s supposedly cake, somewhere, but I’ve never found it.

The cake is a LIE! Do you think perhaps there’s a portal under Loch Ness, and that’s why we’ve never really seen Nessie?

I think that would present drainage issues.

At the heart of Riverland is the story of the sisters and the abusive household in which they live. Riverland the place becomes an escape from their every day, but contains its own horrors and challenges. The story of deciding to save a world is never an easy one; how do we decide to keep saving our world?

We just do. We are our world. We need to keep saving ourselves.

Which Hogwarts house did you get sorted into?

I’m out in the barn with the Hippogryphs. (Kidding. I’m a HuffleClaw /  RavenDor)

Tell us about something GREAT and EXTRAORDINARY that you’ve read recently.

Karen Russell’s Orange World and Other Stories.  Tillie Walden’s On a Sunbeam.

I’m working on two new books (including a new middle grade novel and one set in the Gemworld), as well as more Ninth Step Station and a new Serial Box project. I’m also the Director of the Genre Writing MFA at Western Colorado University, and that’s really pretty cool. Plus, His Hideous Heart, Edgar Allan Poe retellings by thirteen YA authors, just came out, so I’ve gotten to dress in black and stompy boots (not really a stretch) and go around talking about how great it is.

Thanks for coming by, Fran! Readers, we hope you’ll grab a copy of Riverland, and perhaps His Hideous Heart while you’re at it.