We’ve made Issue 14 and Issue 15 available at Barnes and Noble, and all future issues will be released there at the same time as we release them on this site, at Amazon, and in other markets.

So if you got a Nook for Christmas, why not treat yourself to a copy of Shimmer?

Jennifer Rickard at Shiny Shorts takes a look at Shimmer#14, and finds some stories to treasure!

“Shimmer is a very rewarding magazine to read because it always contains a real mixture of different genres, worlds and characters within it, and issue #14 is no different, with a range of different stories and different talents within it.”

And a quick reminder: take our reader survey on Shimmer #15 to be entered in a drawing for a free back issue of Shimmer! The survey ends tomorrow!

SFRevu has delightful things to say about Shimmer #14!

In short: “Shimmer is the kind of magazine you should read in one sitting, letting the beautiful words wash over you.” We couldn’t agree more!

Don’t forget, Shimmer #14 is our first issue that is available for the Kindle. This week, it’s an amazing 99 cents (77p for you across the pond!).

We’re delighted to announce that Shimmer Issue 14 is now available for the Kindle! All the same great stories and illustrations, but now super-convenient to read on your Kindle or Kindle app.

To celebrate, we’ve priced it at just 99 cents for a week, so grab it while it’s hot. We even enabled lending, so you can share it with a friend. Click here to buy your copy of Shimmer Issue 14 for your Kindle today!

And once you’ve read it? Go ahead and post a review on Amazon. We’d love to hear what you think, and are scheming up a special prize to be awarded to a randomly-selected reviewer. Stay tuned for details.

Over at Locus Magazine, Lois Tilton has her usual rundown of recent and current short fiction, including Shimmer #14! Of our ten stories, two are recommended reads.

“A nice issue of this little magazine, with several stories more science-fictional than fantastic.”

It’s December (for a little while yet!), so surely that means it’s time for a look back at the year that was. This past January, we looked at what we hoped to achieve in the coming year — did you make the goals you set? What are you planning for 2012?

Shimmer received approximately 2400 submissions in 2011–which seemed big, but when I looked back at 2010, with 1800 submissions, seemed even bigger! Of those 2400, about 6% (136) were passed up the editorial chain for further consideration.  We accepted eight out of those 136, a smaller number than usual (and split between issues fourteen and fifteen). Six stories were from women, two from men.

It’s much harder to break down overall gender stats, but a glance at the reams of email looks to be about 500 male submissions for every 300 female submissions. 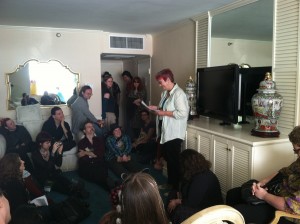 Our blog became a regular thing in 2011, with the addition of the Advice for Newer Writers feature. We hope to take that to the next level in 2012, pushing you beyond the basics. Do you have a topic you’d like to see us tackle?

In March, we were part of #zinechat on Twitter, with editors wrangling questions from writers and readers. This lead to a great conversation about exactly what Shimmer wants in its stories, as well as our next themed issue which is still in the planning stages. Want to follow the Shimmer staff on Twitter? You can start with @bethwodzinski and @ecthetwit and go from there! 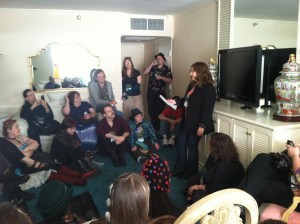 There were some changes to the staff line up, most notably Beth shifting her role and handing off senior editing duties to me. (And what is there to know about me? I like the Oxford comma, I appreciate cupcakes, and have fallen in love with Gabriel García Márquez.)

Grá Linnaea and Keffy Kehrli were promoted to full-blown editors, the talented Sandro Castelli joined us as Minister of Art, and Matt Barron as Minister of Layout! We gained Associate Editors Shalene Gupta and Josh Vogt. Associate Editor Sophie Werely leaves us as the year winds down and while we will miss her smiling face, we know she’s destined for bigger and better things. 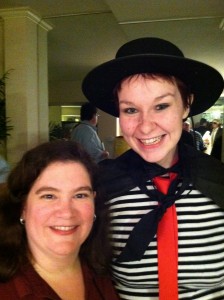 Three issues of Shimmer! Shimmer for your eReaders! A themed issue? More cake! More monkeys! Maybe we’ll finally get our very own TARDIS… There will certainly be more conventions, and parties, and readings.

Thank you for being part of Shimmer this past year. We can’t do what we do without you. Publishing is constantly changing, but our goal remains the same: to bring you amazing fiction that stays with you long after you close an issue. If we did that this year, we were successful! Onward to the next.